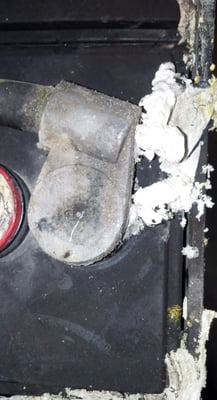 Unfortunately, batteries are not immortal. They have a finite life, and only through proper maintenance can you get the most out of each and every one. While proper battery maintenance requires a motive power partner, there are warning signs that can help you identify problems.

Although on some occasions you might catch an issue earlier enough to salvage an industrial battery, the situations we'll discuss today typically signal it's time to replace your industrial battery system. Here are some common issues we've experienced with our customers:

An obvious warning sign, a short run time after charging definitely indicates your battery is waning. The moment a battery shows signs of slowing down earlier than usual, it's important to have it checked. While this could mean the battery has a technical problem, often it just means the battery is old and needs to be replaced. No matter the reason, waiting to address the issue can cause unnecessary downtime.

As a battery ages or undergoes abuse, the positive plates will swell. Think about it: all of the battery cells are side-by-side in a tray. They're surrounded by a steel case—except for the top. So any swelling pressure will push the positive post through the top of the cover. You'll even see your positive inner cells pushed up, along with the red grommet, as high as half an inch. Needless to say, this is a sign your battery is on its last leg.

This distinctive smell definitely signals a battery problem. One culprit could be a shorted cell. However, the smell could also come from corrosion sitting on top of the battery. When corrosion gets wet from watering, it conducts electricity, which can burn a hole through the top. This is an example where catching it early could save the battery; ignoring it will certainly lead to a full replacement.

Sometimes you'll plug your battery into the battery charger, only to have the charger shut off. Many customers immediately blame the charger, but often the problem is the battery. If a battery has shorted, and the voltage spikes, the charger will fault because it's reading total voltage and shutting down accordingly. Think of it this way: a charger can't charge a damaged battery. To get your forklift charged, first you have to determine whether the charger or battery is to blame.

A battery sulphates as it gets older, which means it will start to run hotter. Believe it or not, an operator can sometimes feel this increased heat while on the forklift, or when they go to unplug the battery from the charger. If you sense a significant spike in heat, this is another indication that your battery has a major issue, and more than likely will need to be replaced.

If You Sense a Problem, Call in the Calvary

The good thing about many of these warning signs is that a savvy operator will notice them immediately—they're obvious issues, and you don't need an expert to "read" the battery to know there's a problem. At that point, it's up to an operator to report the issue to a manager, and then it's up the manager to call in their motive power provider. Your motive power provider will be able to repair the battery, or install a proper replacement. As with most warning signs, the most important rule is to act quickly and decisively. When it comes to batteries, procrastination will only exacerbate an existing problem.

The Six Most Important Attributes About Forklifts

Buying a new forklift is much like buying a new car; a ton of research goes into the purchase, and...

For many companies, calling in a motive power management company to perform an industrial site...

How to Think About Forklift Telematics and the Internet of Things

What is IOT and IIOT and Why Does It Matter to Your Business? What do we mean when we refer to IOT...