What Tesla's Battery Day Says About the Future of Material Handling 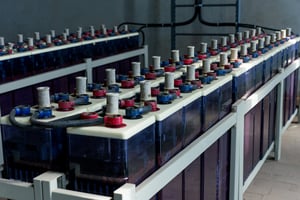 In honor of Battery Day, we wanted to spend a minute talking a little bit about where batteries have come from and where we’re headed as an industry.  We will then highlight some articles that might be valuable to you as we celebrate the battery.

First of all, in the forklift power and critical power space, lead acid batteries have been driving us for a long time.  Historically, it’s been with both flooded and sealed batteries.  These batteries have led to major green improvements in forklifts’ carbon front as today over 60% of new forklifts purchased are electric versus internal combustion forklifts run by propane/diesel.  If automobiles were at this level of electrification worldwide, we might be having different conversations about the carbon footprint improvements we’ve made.  Lead acid has also become one of the best examples of a circular economy product in the whole world—if that isn’t green, we don’t know what is!

These major innovations have been driven by the need for higher energy/lower cost for car batteries, as well as for small electronics like cell phones.  The cost and energy profile improvements in lithium technology that Tesla is driving are exciting and have built on lithium ion advances that Apple and others made via the iPhone, etc.  These innovations are now being adopted in other industries like material handling equipment and critical power systems.  Lithium ion and even hydrogen fuel cell innovations have driven the trusty lead acid battery to innovate.  New chemistries are leading to new generations of thin plate pure lead (TPPL) products that boast improved chemistries/constructions and battery management software giving us a peek at our future:  lower-cost batteries with higher energy density, faster charging speeds, and reduced maintenance requirements.

These new technologies promise a whole new level of energy storage capacity and will transform the way we do things!  Lower-cost energy storage solutions will enable a renewable, “green” energy future.

Why are batteries so critical to attaining a green future?

Many of the “clean” power sources like wind and solar are unable to deliver a constant amount of power due to the intermittent intensity of wind speeds or solar irradiance as they harness our world’s natural power sources to generate electricity.  Solar can only generate power when the sun is shining and is dependent on cloud cover and sun angle on the solar arrays.  Wind power can change in intensity on a dime, and both can be highly seasonal and dependent on the location of where the power is generated.  To use them effectively, you have to store some of the energy created so you can use it during the hours when the sun isn’t shining or the wind isn’t blowing.

Batteries are the key enabling energy storage devices that allow you to balance out those greener power sources.  They need to be able to store lots of energy in a cost-effective way to operate under normal conditions—and have extra power in the “tank” in case of an elongated period of cloudiness or still air conditions.  Even with today’s fossil fuel-powered systems, I’m sure most families in California wish they had generators and backup batteries to power their homes during the rolling blackouts.

5 Ways to Destroy Your Forklift Battery

Most of us are careful about the way we treat our precious cell phones, taking care to ensure that...

As with most technologies, the only constant is change. As soon as your business falls into a...

Unfortunately, batteries are not immortal. They have a finite life, and only through proper...